Are there any statitics about activity somewhere in Zammad, a log file or in the ruby console?

What I am looking for is the number of currently active agents. So logged-in users that have actively worked on a ticket in the past 30 or 60 minutes.
Idealy there would be even more statistics like opened tickets. Not the tickets with status “open” but those that are opened/viewed by an agent.

The reason is, that I would like to see a direct comparsion of users/agents active and the server load and use of ram.

I’ve not found that opened ticketes by agents are logged.
But did you check the database?

there might be some tables which might help you further.
The tickets<=>ticketArticles table could show you how many agents worked on a ticket in a timeframe
I also see the karmaActivityLogs<=>karmaActivity which seems contain log many events that could happen on a ticket; 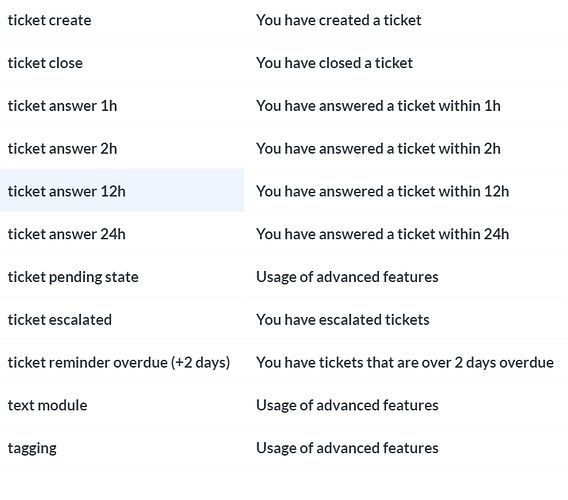 if you check my grafana topic (Grafana dashboards), you can download some queries. You probably could expand on the messages per ticket query to figure this per agent per ticket.

In general i find it very hard to find where i could gather good statistics from the usage and tickets. But this is probably a lack of knowledge on zammad.
It would be nice if there was some documentation on this, besides the general reporting.

That will provide all currently active Sessions in your instance.

Hi @olafbuitelaar
Thanks for sharing. We are already using grafana at this instance and I will have a look at the options with ES.

@MrGeneration when does a session become inactive? For example x minutes after the last user input?
Can I separate the current active sessions in agents sessions and regular/client users?

And a last question where maybe someone has an idea: We are running Zammad on Debian 10 with nothing else on that server as Zammad, Elasticsearch and Grafana (influx DB). The server has 2 cores and 4 GB RAM. Only 2-3 agents are active.
Free RAM ≈ 250 MB
Available RAM ≈ 950 MB
Used SWAP ≈ 300 - 350 MB

Any idea what is causing the SWAP?

@ecomsilio another thing that occurred to me, you could check the histories table, this contains all interactions, but is in a bit hard format to gather statistics from. but you could gauge some numbers…of changes per day for example.

If you have any interesting grafana dashboards/ideas to share…i’m eager to hear them.

So far I have found out that the SWAP is created by Elasticsearch and not Zammad. I will try to find out some more details. I looks like ES is just caching some queries. Especially since used RAM is less than 2.5 Gb of the total available 4 Gb.

indeed ES is memory hungry, it uses about 1.4GB on my install. Maybe you can host your ES on another machine. Or maybe you can downtune the java heap sizes; Heap: Sizing and Swapping | Elasticsearch: The Definitive Guide [2.x] | Elastic
I believe technically ES is not required for zammad, but it is used for it’s indexing capabilities and thus optimizes searches and maybe other data retrieval.

Beside of that, swapping also is a topic depending on the system.
The keyword to look for here is swapiness which decides on how fast your system will start to swap.

But yes, limitting Zammads memory usage may be relevant too!

when does a session become inactive? For example x minutes after the last user input?

As far as I’m aware this should happens within minutes in worst case.
Should depend a bit on how the session is ended. To be honest, I’m a bit lazy to search in the code right now. It shouldn’t be more than 5 minutes though.

Can I separate the current active sessions in agents sessions and regular/client users?

As it returns the user in question, you could technically use a script to find that out. There’s no native way through.