Here’s a screenshot from one of the affected users: 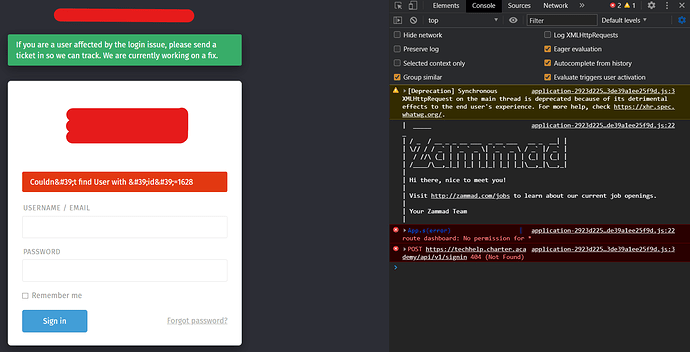 We know of at least 3 users affected by the issue. In each case, the user ID the error reports doesn’t exist in the database. I supposed we could delete the account and create them a new one, but we don’t know how many users are actually impacted, and we’d lose the history associated with the old user (not really a deal breaker, but still not ideal).

Clear your cache and try again. `rails r “Cache.clear” Try to find the user on the console if in doubt. If you can’t find the user on console and by searching in your instance, it’s proberbly removed.

As I already pointed out there, clear your cache and try logging in again.
zammad run rails Cache.clear

I currently don’t see any reason why this should appear.

However, it would be good to know which authentication source you guys are using. Because the steps to reproduce are not clear.

Just before anybody screams:
Zammad will not remove users on it’s own unless one tells it to do so.