i’m trying to create a macro which sends an automated reply (via email). I know generally the idea is to use a text module for this. But i thought it would be nice to select a bunch of tickets, and run the macro to send a certain response at once.

I first tried to create a macro which add’s a note, but this just seems to be a note, and doesn’t send an email. Also the note feature seems to have a bug; Article Notes added via Macro are not HTML formatted · Issue #2980 · zammad/zammad · GitHub

Then i thought i would let the macro add a tag, and create a trigger on that tag; 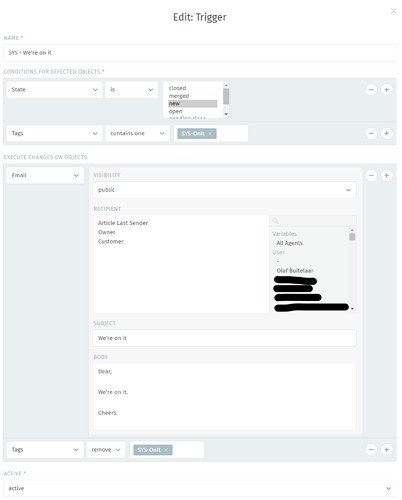 image1444×1794 143 KB
but the macro only seems to add the tag, but doesn’t seem to trigger the trigger.
Only after adding a note it seems the trigger is ran;

Could it be that it’s caused by this bug; Trigger ignores changes on some Ticket attributes · Issue #3428 · zammad/zammad · GitHub
Or is there another way to achieve this?

why are you trying to reinvent the wheel?
There is a trigger already built-in in Zammad for that: 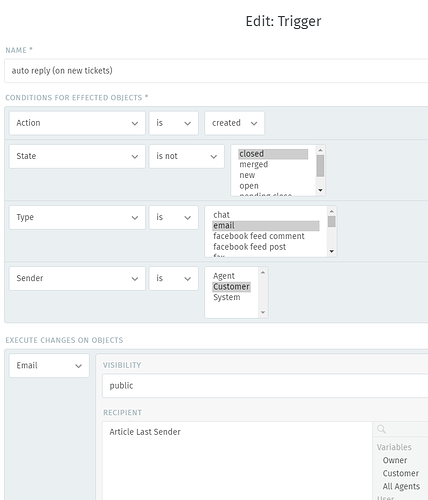 Feel free to modify the text sent to your clients:

Thanks for your reply. But it looks like this will automatically send a response by zammad.
What i’m looking for is a user/agent initiated response.

Agents can always reply to the ticket from inside the ticket:

Sure that does work. Only i wanted to create a set of macro’s with standard answers, which you could directly run on a bunch of tickets, without the need of going into the ticket, and reply, possibly of course with a text module.
The macro would be practical for this, since you can run them from your overviews.

IMHO, you should try to avoid “spamming” your customers.
In our case, it is enough to use the built-in triggers. With them, the client gets an email when the issue is received, when it changes its status or ownership (i.e. agent changes) and when it is closed. This should be more than enough.

If your customers require extra feedback, it’s always a good idea to reply from within the ticket to keep everyting logged just in case someone asks or audits your procedures.

Totally agree, that was in fact one of the reasons. We have no automated replies at all, since we don’t want generate automated message’s, and generally trust when you send an email it will arrive, and eventually be looked at by a human. But sometimes for example customers are demanding…and keep asking have had a look at it yet, or something…for that it would be nice to just run the marco for example.

Your use case sounds like a huge batch of macros.
This may get a night mare for your agents quickly.

Instead, you may want to have a look on text modules maybe?
Allows your agents to load the answers quickly without having 20 macros to choose from.

Thanks for your thought’s and i understand what you mean. But it might be useful for the really most common replies, instead of resorting to text modules, as described in my use-case.