When first installing and running Zammad for evaluation purposes, the initial setup screen asks for SMTP settings, but we initially ran into some difficulty (and it appears several people have also reported this difficulty). 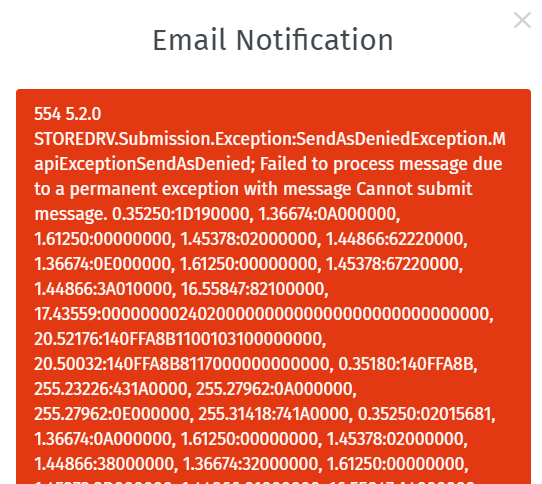 The error message indicates that it failed with a “…SendAsDenied” error, which was surprising at first as it was not clear that Zammad would be trying to use a different “From” address to the address that we were configuring.

Eventually, we were able to set up the notification email settings by going to Admin -> Email -> Settings and discovering the “Notification Sender” option was set to “NoReply@…”, which we subsequently changed.

We were trying to hook up an Office 365 account and unable to change the email account settings at that time to allow sending as a different email. We also did not know which “From” address we should support. So it would have been nice to see and modify the “Notification Sender” within this setup screen, maybe within some advanced settings.

Personally I don’t think that that approach is a good idea.
This would help you during the smtp configuration, but might not help you for e.g. sendmail.

Besides, it would tear apart a setting which would make 1 setting to 2 settings. This might also cause duplicate configuration options which might be not what your goal is.

But that’s just my thought.
Beside, the documentation currently is undergoing changes on exactly this topic:

This might also help to solve those issues in the future, what do you think?

We’re trying to aim with simple options and ui operations. I think your request might bloat that up a little bit.

This doesn’t mean that it’s a bad idea, don’t get me wrong please.

Personally I think that if you are presenting a setup screen then the user should be able to enter all of the relevant settings to get it working. I still think a “more” or “advanced” drop down would work nicely during this initial setup. I think this would still be my preference.

Alternatively, maybe after an initial verification failure, the user could be informed that they can skip this step for now and continue the setup later in the admin settings.

Personally, I was a little nervous about “skipping” the step (my only option to do this would have been to select a setting that I actually did not want to use) and continued to try (with no joy) to get it to work.
My logic was:

If not any of this, then I would probably prefer to not see this SMTP setup screen at all (just default to using the server Local Message Transfer Agent - I had to look this term up) and maybe the “First Steps” could guide the user to set any additional notification email settings up.

I guess it depends on what proportion of users are using either of the modes. I have seen several cases of people reporting issues trying to configure SMTP settings and I think not seeing all available options is confusing people and not allowing them to solve it themselves. The worst-case for Zammad would be that some people could even be giving up at this initial setup stage after not seeing a way forward.

Thank you very much for your feedback!
I really appreciate it!

I absolutely can understand your use case and your thoughts.